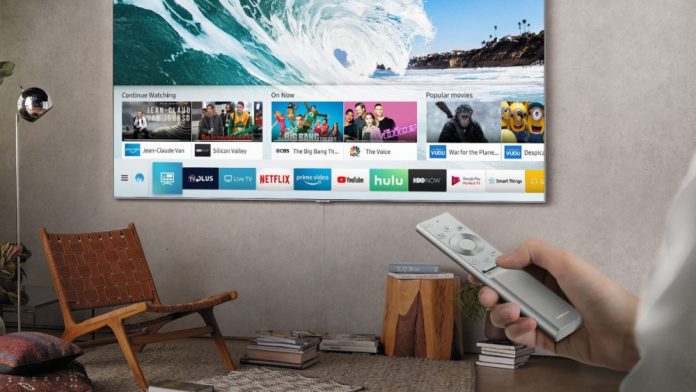 A Smart TV is a TV with built-in Internet access and interactive “Web 2.0” capabilities. One of the most popular TV products is the Samsung Smart TV. The Samsung Smart TV offers several helpful apps to utilize, and I have listed practically all of the Smart TV Apps from Samsung’s Smart Hub in this post. The Samsung TV-Hub has many apps for entertainment, fashion, sports, streaming, VOD, Kids, Infotainment, and much more. Few apps may be unavailable for older TV shows, while others may be unavailable for current series. However, the apps listed below are most likely compatible with all Samsung Smart TVs.

The Netflix allows you to stream videos from the web to your TV screen without using an additional device. Almost all Samsung Smart TVs come with the Netflix app pre-installed or may be downloaded. In this instance, you must search for Netflix in the installed app list, sign in, and start watching.

The Amazon Video is an Internet video-on-demand service that Amazon created, owns, and operates. In addition, Amazon has some fantastic exclusive content. It is available in the United States, the United Kingdom, India, and other European nations.

Disney+ is a subscription-based video-on-demand service that has been termed Netflix’s main challenger. Though the number of content is rather minimal when compared to Netflix, the quality it provides is outstanding, given that it has just recently begun operations. In addition, Disney Plus has numerous hard-to-find movies, such as the Star Wars series and the immensely popular Marvel movies.

YT TV is a streaming subscription service that provides over-the-top (OTT) content in the United States. ABC, The CW, Fox, CBS, NBC, and other networks are included. The service provides Cloud DVR with no DVR storage space limitations. 6 YouTube TV accounts, each with its login and DVR. The service provides over 80 US channels that may be streamed straight to a phone or PC without using a cable box.

PlayStation Now lets you play a wide range of PlayStation 3 games on your TV. The app manages the heavy-loaded games by immediately streaming them from Sony’s servers. Fewer of the quicker games may not be as snappy as when operating natively on a console. Still, a strong internet connection can decrease the cluttering effects to make gaming more engaging.

Hulu is another popular American subscription video-on-demand service that provides its viewers with some of the most popular and unique content.

Do you enjoy music? If you answered yes, Spotify could transform your TV into a little music theatre with over 30 million tunes. It even lets you subscribe to and change the playlist to keep your tunes organized.

Vudu is a video-on-demand service that lets you pay as you go. It is recognized for providing high-quality video and audio, including the most recent Dolby Atmos surround sound releases. I’ve listed all of the Apps for Samsung Smart TV below; check your favorite. To locate any of the following on your TV.

One of the most popular media players for remote access to content over the server. Using the Plex Media Center, you may stream any media from your PC or phone to your Samsung TV. Movies and content are also available via approved distributors.

HBO is another VOD service that offers a one-stop shop for premium flagship content such as Game of Thrones. HBO Now is a separate content distribution service for all HBO Studios and Partners’ programs and movies.

The Dazn is a video streaming service that requires a membership. The sports service provides live and on-demand streaming of various properties’ activities. Dazn is available in Austria, Germany, Japan, Switzerland, Canada, the United States, Italy, Spain, and Brazil.

The Samsung Smart TV App also has a Web search function. With a Web 2.0 App from Samsung, you may search for your question immediately on the TV.

Sling TV is a reasonably priced live TV streaming service on the market. The simplicity of customization, the number of channels, and the reasonable cost make it a good platform for all supported devices. Sling’s Orange plan costs $15 per month and includes 31 channels. It has an adequate selection of basic sports, news, and entertainment channels.

BBC iPlayer is an internet streaming and VOD service. With the iPlayer on your Samsung TV, you can watch live shows or catch-up content. It is highly popular and has geographical limitations because it is only accessible in the United Kingdom. However, it includes a big selection of BBC network videos.

PlutoTV is a free TV platform with over 100 TV channels, many movies, and TV shows. Between-programme video adverts create cash for TV. Aside from Live TV, they also feature On-Demand Movies that you can watch immediately.

You may check your favorite Apps by pressing Ctrl+F and typing the App name into the search box.

Note: Apps availability varies by nation and TV series; some of the apps listed below may not be available depending on your area and TV model.

The table below lists all the video streaming Apps available for Samsung Smart TV.

Sports apps may broadcast video or just display stats like a scoreboard.

The preceding post provides a persuasive list of all the apps available on the Samsung Smart TV. The availability of the Apps may be restricted by area. I hope you found this post useful. I will keep you updated. If you have any opinions about the Samsung Smart TV Apps List on Smart Hub, please comment below.